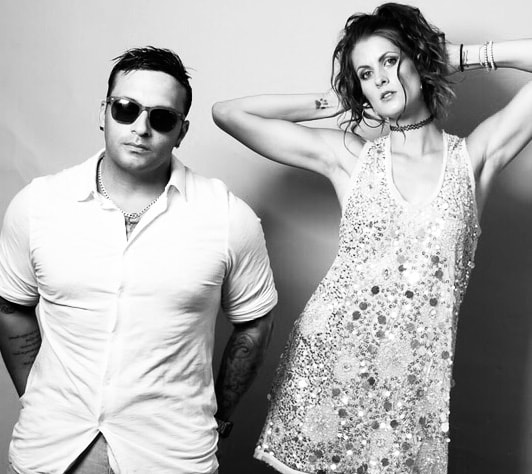 The Cameleonz are a hi tec Vocal harmony duo.

Marcus and Lis are international touring artists with years of professional experience, performing on thousands of shows throughout their musical career, from London to Amsterdam, Copenhagen to Helsinki and Milano to Ibiza performing on some of the biggest events in Europe, taking the stage in live clubs and concert halls to crowds of 2,000 people to Arena’s of 22,000 people to open air festivals of over 40,000 people along side multi platinum selling artists from around the world.
So it’s safe to say that Marcus & Lis are no strangers to the stage.

They don’t take themselves too seriously but they do take their music seriously and pride themselves on being reliable and professional at all times.

Marcus and Lis equally love performing to a more intimate audience and have also performed all around the UK performing in small live venues to weddings, private functions to military and corporate events receiving the Mercury Award for Best Duo.
Marcus was a contestant in the final 50 for ITVs Pop Stars The Rivals that became famous for the success of Girls Aloud. He was also awarded as the best recruit on ITVs hit show Bad Lads Army that had over 6.7 million people tune into the show. He has also worked on DJ sets alongside Rizzle Kicks, Joe Gilgun, Katie Price, Mc Neat and DJ Luck plus many more….

Lis has worked as a model, musician and vocalist form the age of 16 and throughout this time many different products including Holster Australia, Lip Smackers, Hair True, Bperfect and LA Muscle have sponsored her. She was invited to the Emirates Stadium to perform for George Foreman and formed her own vocal harmony band and led them to Bootcamp for ITVs Xfactor.

The Cameleonz had a mid week top 20 in the official UK charts with their single should I stay, selling over 10,000 copies in its first week of sales, featuring a cameo role from the father of Robbie Williams. The song also hit the number one spot on Spotify for the most plays over 24 hours.
Should I Stay was nominated for the lime light video awards and was featured on MTV and VH1 Capital requests.

The Cameleonz is a high quality live show that has adapted to work in almost any venue performing hits from across the decades for people to sing, dance, drink and be merry to.